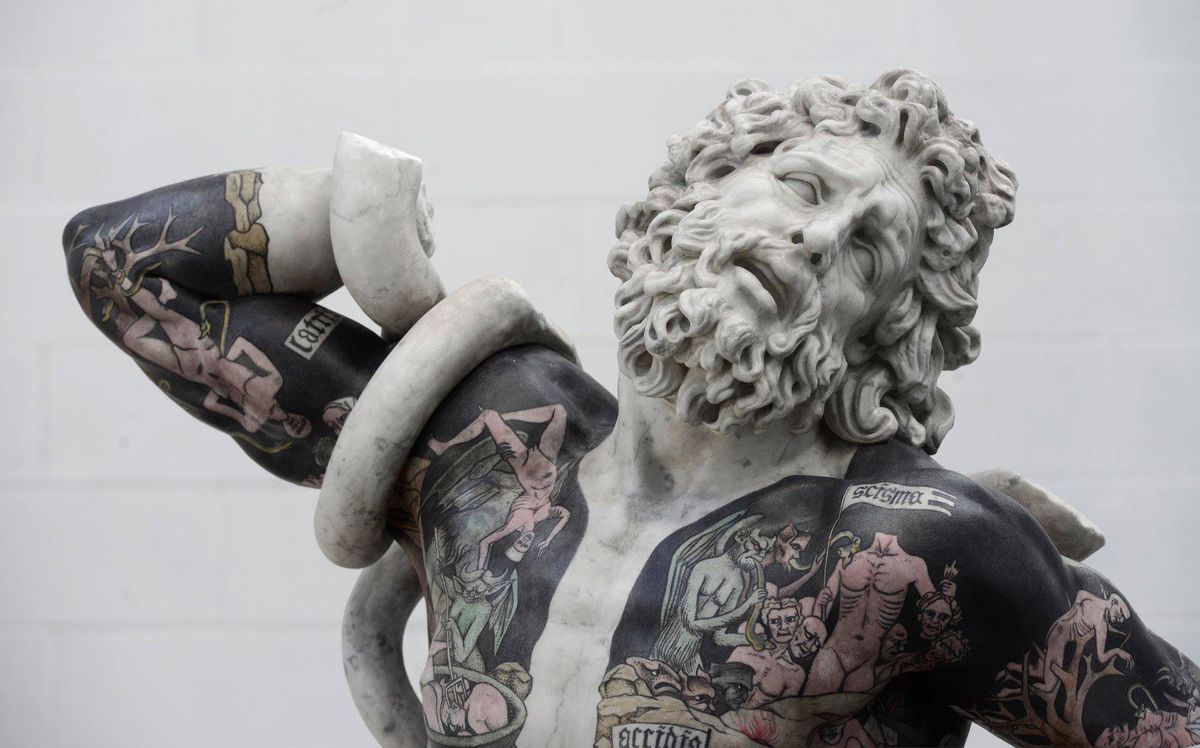 The Italian marble sculptor Fabio Viale returns to Turin with a wonderful exhibition called FIFTEEN. It celebrates the bond that Viale has since fifteen years with the GAS gallery (now Gagliardi e Domke) and in particular with its founder Pietro Gagliardi.

The artist, who was born in Cuneo in 1975, plays virtuously with his favourite material, marble, and messes up our usual ways of seeing. For instance with larger-than-life screw plugs, filigree paper airplanes or car tires that are apparently made from rubber, but are actually also made from marble. Viale often chooses examples from antiquity such as the Laocoon group, and covers these sculptures with tattoos. Or he reworks classical sculptures in such a way that they seem to have been made from styrofoam and not out of marble.

The GAS gallery started in 2003 and in the same year Fabio Viale executed his first performance on the Po river with ‘Ahgalla’, the marble boat that would soon become one of his icons. A strong signal from an artist whose character could not escape Pietro Gagliardi who – through his background as a creative in advertising – was accustomed to discover hidden talents capable of building emphatic bridges between an audience and contemporary art.

From Kick-starter, the artist’s first solo show in 2005, to Souvenirs in which his masterpiece ‘Pietà’ was presented, numerous participations in international exhibitions and fairs lead Fabio Viale from Basel to Miami or Moscow. Performances in Venice or St. Petersburg contributed to establish his international standing as well as prestigious prizes from the Fondazione Henraux, Querceta – Lucca 2012 or the 15th Premio Cairo in Milano. The city of Carrara goes as far to define him as the artist that brought marble into the new millennium.

Viale intuitively imagined that the difficult neighbourhood where his home and his studio are now located, Barriera, would over time become the trendy neighbourhood of Torino. GAS followed his footsteps – increasingly committed to promoting sculptures and installation works and in need of larger surfaces, the gallery moved from the city centre to this new post-industrial surroundings, wedged between the artist’s house and his studios.

With his marble sculpture ‘David’, Michelangelo created a symbol for this classic hero. This face is now not only transferred into the present time but has simultaneously been turned into a new image. Decorated with the same tattoos as the successful rapper Young Signorino, ‘David’ finds a new, contemporary identity. As a child of his time, Signorino used social media to bring the tune of his famous ‘Mmhha ha ha ha’ directly to his audience. A similar rebirth can be seen in ‘Souvenir David’, the new sculpture by Fabio Viale, which forms the cornerstone of the exhibition FIFTEEN.

With good reason FIFTEEN celebrates an exemplary artist-gallerist association. Visitors of the exhibition, which will occupy more than 700 sqm of Via Cervino 16, will have a unique opportunity to discover some of the fundamental works of the artist up to the most recent masterpieces exhibited earlier this summer at the Glyptothek in Munich.

Those who know Viale also know that it is his daily practice to overturn the normal sense of things to discover new meanings. For the catalogue that is published on this occasion, he reverses a custom that often sees the artist interviewed by the gallerist, being himself the interviewer of the gallerist. 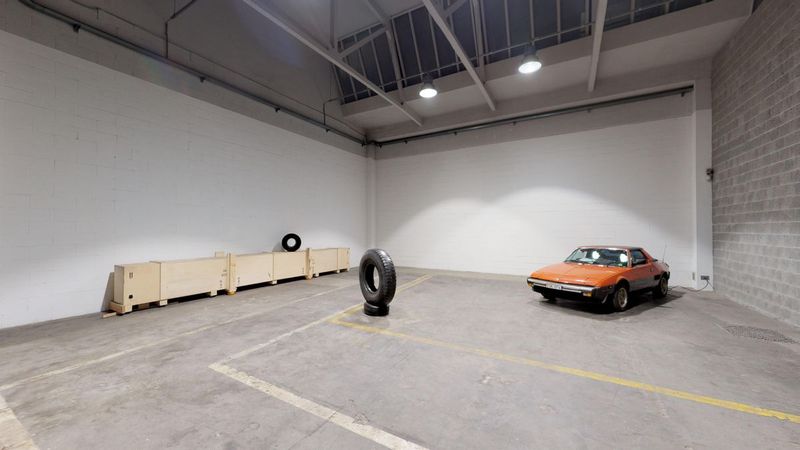 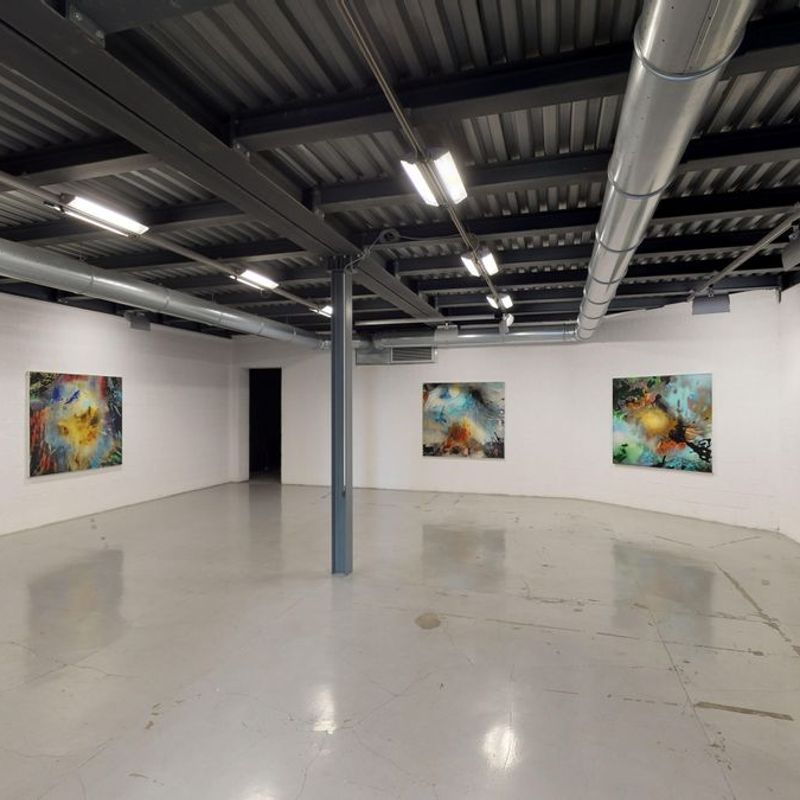 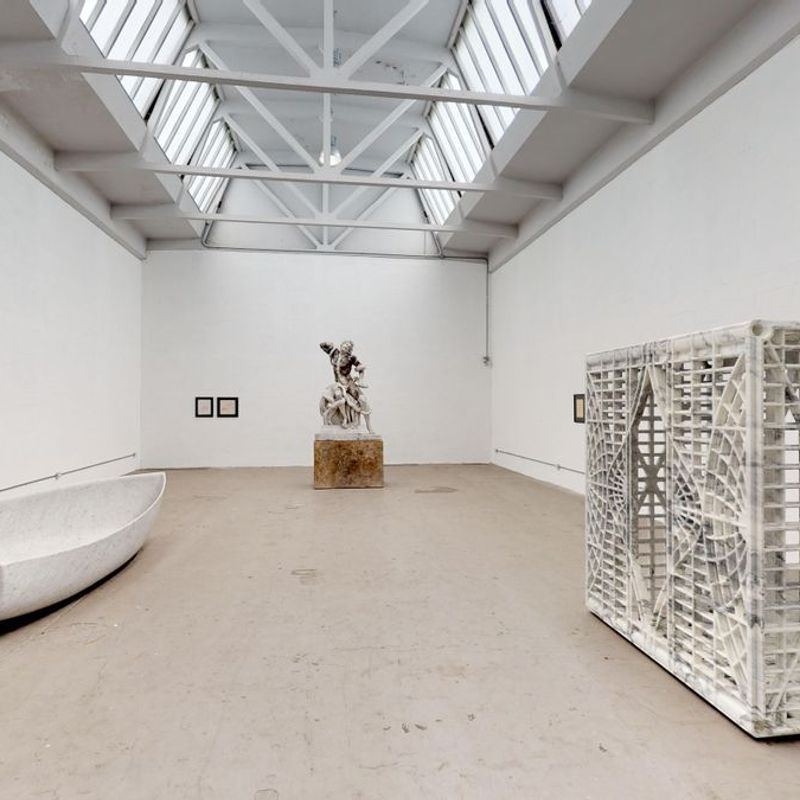 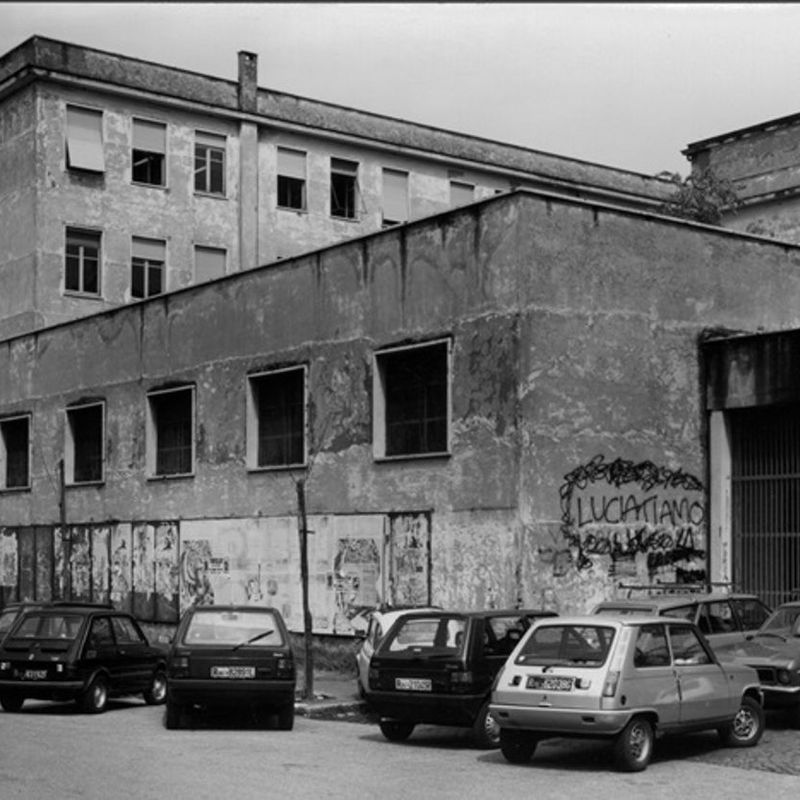