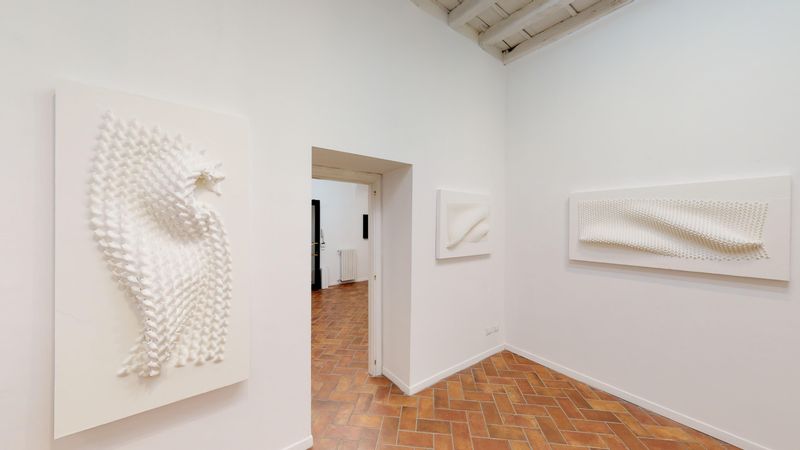 The flexibility of its "felts" sublimates a matter that becomes the extrusionless ripple of hypothetical surfaces in which to create a sort of final interrogation to the technical process and to the pictorial language. So works are created in which the author tries to recover the primary and convoluted substance of the ancient painting, sometimes made of unprecedented surfaces that curl up chromatic mixtures composed by velvety and elegant wax. The inventive adventure requires innovative substances and the overcoming of the ancient rules and of the disciplinary barriers. An experience of the bound (at the limit of the third dimension) is unraveled by an art that lives on the signs of art, just as a written narrative needs words. A painting that is a communicative act made of poetry and painting, before becoming silence and pure space. As in the horizons of Minimalism with its elements of repetition, of materiality, of ssimplification, the phenomenological experience requests its price and the relative must really experience fully the essence of color and matter in an endless territory, where you enter and dive to experience that lead to the loss of the center. The cut and assembled artfully felt and the white, or blackened with dark pigments wax are first of all what they are: ideal supports to bring out light and material tensions, receptacle of obsessively repeated signs on ruffled monochromatic surfaces on which the shadow of an invented writing extends, to the most elegiac point.

The world of Matteo Gironi is all contained in these extremely simple works, devoid of rhetoric, yet exciting in their extreme, almost ethereal concentration. The artist knows the world of art and its reflections, but he looks at them from afar, with the detachment of those who know that art is a choice pervaded by the unrest of an unstable equilibrium, in which all the trepidation and the aspiration to infinity possess an imprint of sacredness. This is what carryout its fascinating counterpoints, its visual fugues, the folds that move like old drapery and on whose curves stretch, until the rarefaction of the sign, the little modules of tiny material interweaving like the warp textures of small nets , of notations of a sort of Bach music full of a mystery imbued with incommensurable formal perfection, and which refers to that infinity which is a sign of the perfection of him who holds the gears of heaven. Hence, his work is both minimalist and baroque, a hymn to aspiration, transcendence and the light clarity of the compositional process.

A mysterious motion of light advances on the waves of the excited felts of Matteo Gironi. Between art and truth, between the tiny human being and the immense outcrop of the infinite, between matter and spirituality: it is the search for beauty and truth that pushes Matteo's artistic impulse, a research that is not intended to stop, as in the oscillation of a pendulum, unstoppably moving. Because beauty is, in itself, perfect truth and therefore a part of the divine; but it must be pursued, from earthly hand intelligence, through matter and gesture. 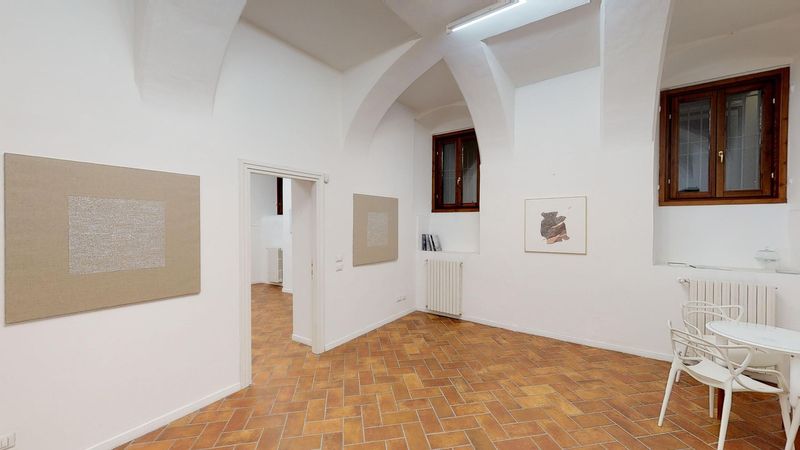 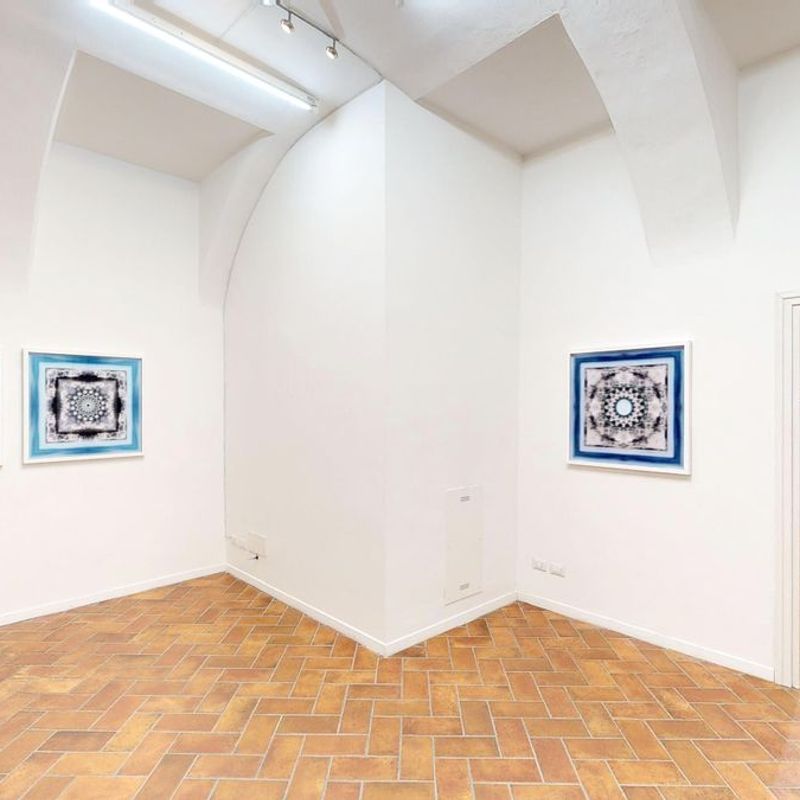 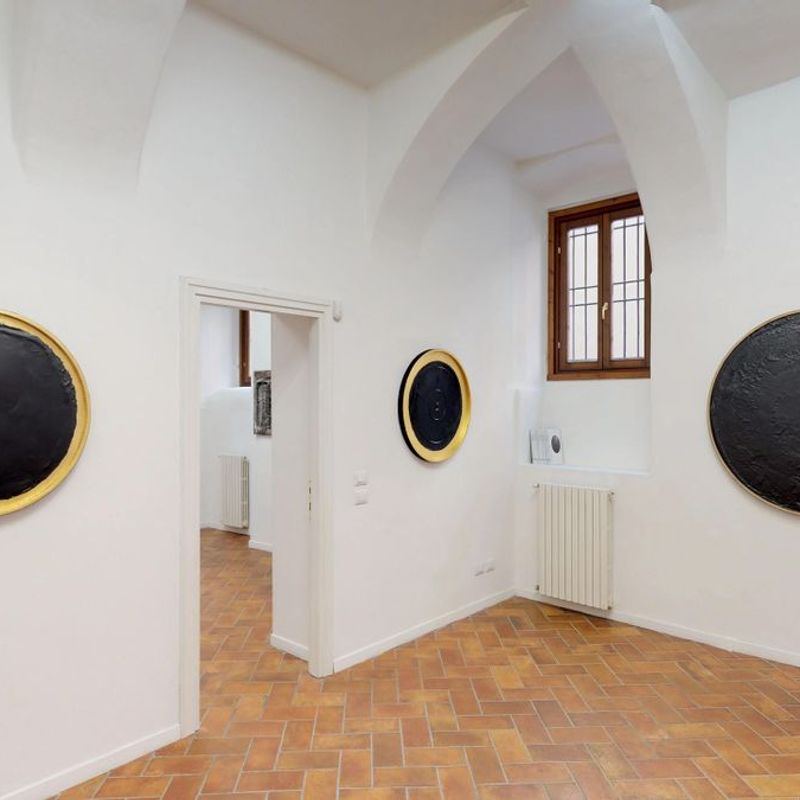 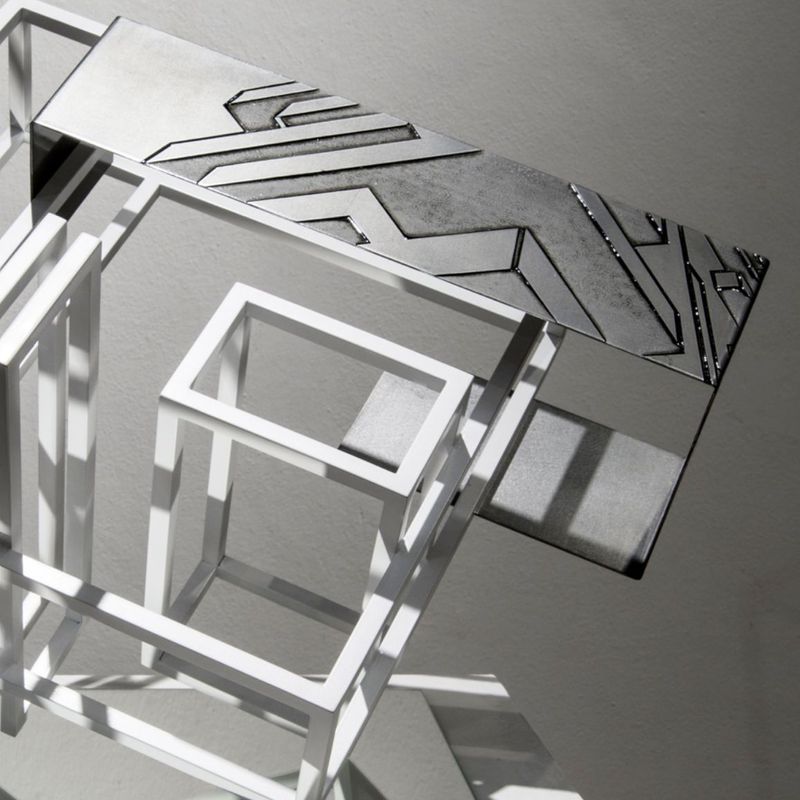