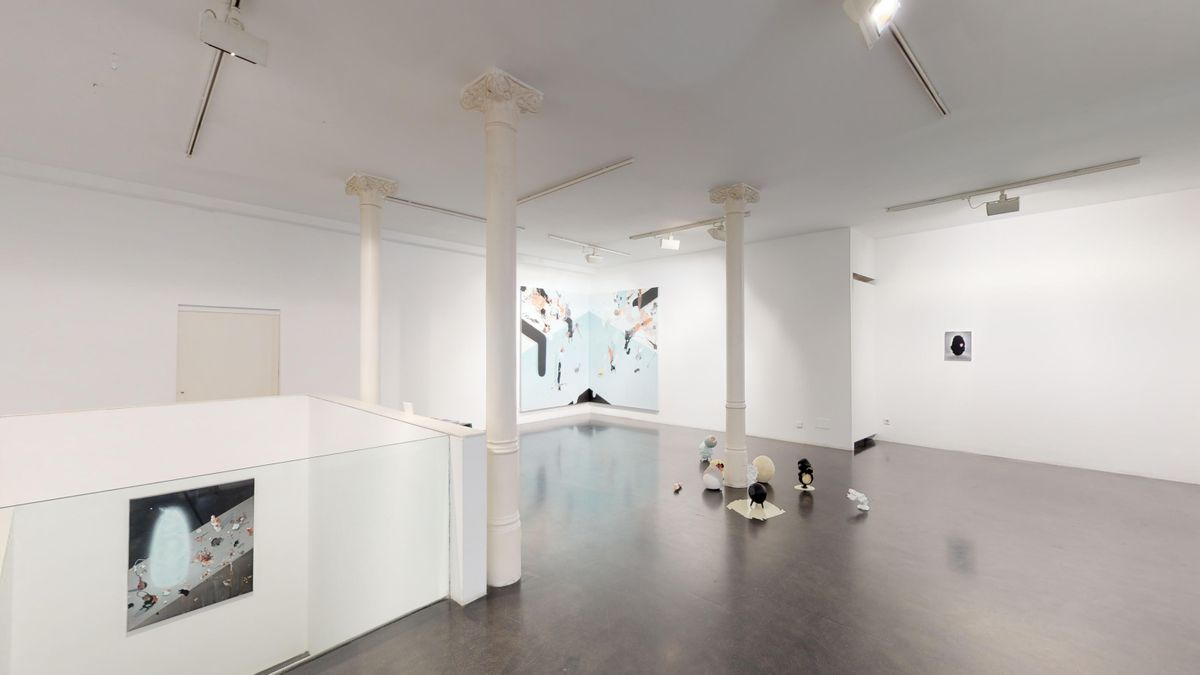 In Waiting for the end to come, as soon as we enter the door we are confronted with a large-scale diptych creating an abyss. The title of the piece is Caos, Abismo, Bostezo (Chaos, Abyss, Yawn), three words which share etymological meanings. The Greek word “chaos”, χάος, means emptiness, an abyss, a great yawn, something bottomless. We see throngs of creatures being drawn towards the edge by the force of the void, hurling themselves into nothingness. An apocalyptic sensation floats in the air. Individual beings are beset by immense forces. A bulge sticks out of the glass in the gallery’s stairwell. It’s a transversal cut, but at the same time it turns this part of the glass into a portal. The creature emerges from the glass and lowers its head, as if sniffing the ground. It appears bashful, or simply unconscious, doubting the reality of our world or the unreality of its own. This is the atmosphere that predominates in times of great change. It is present in the apocalyptic visions of Hieronymus Bosch’s paintings, echoes of which are not hard to find in this work. It is the silence that hangs thickly in the air in the prelude to cataclysm. In Bosch’s case, the drums of rationalism were shaking a world, his world, which found itself in danger of extinction. The human spirit stopped contemplating the heavens and instead began to examine the earth. This change in perspective had a convulsive effect, and those capable of submerging themselves enough felt the jolt before the rest. When they resurfaced, blue from lack of oxygen, they had terror in their eyes. It was in this state that Bosch painted: just before the impact. The cosmic terror that emerges from Lovecraft’s stories is the same fear of the unknown that bathes these pieces. Today, if you can’t feel the world shaking under your feet, it’s because you’re not standing up. Look up, and you will feel how the vibration of the ground below passes through the soles of your feet and jolts your eyes. Haven’t we already seen non-biological intelligence moving with human grace? It is this exponential progress that makes the painter say: “I close my eyes for a second, and the future takes the form of a medieval bestiary”. We look at the heavens, overwhelmed, and open the cartilage of our umbrellas. These creatures give the impression of having emerged in the same way, drawing out their flesh from the movement of the spills, with shuddering reports, like the ocean in Solaris. It all starts with a canvas on the studio floor. The painter says: “I wander nervously around the canvas and when I overcome my vertigo, I spill the pigment. I focus intensely on the process that comes next: it spawns bodies, organic fluids, fields of colour. I let them expand. It is at this point that I start to see shapes.” Then he places the canvas on the wall and looks at the stains, searching to recognise the creatures within. What started as an act of chance now takes on a compositional role. The painter tries to reveal them. “I don’t really know what they are, but I’m not overly concerned,” he says. “I have the feeling that if I scream or point at them, I’ll scare them”. To understand the logic of this world, we have to look at all the figures as a whole. This is when the myriad of sounds coagulates into the coherence of language. In contrast to the organic plasticity of the creatures, the flat surfaces extend into isometric grids, as if the emptiness of this uniformity actually responds to something systematic, a form of logic, some sort of order. We hear exhaust fans, system reboots, flickering fluorescent bulbs, and digital displays. These are “functional” spaces which appear to come from the world of video games. Here, the yawn is a threshold that leads us into the abyss. Despair leads to openness, since it turns any object into something to hang onto, a potential saviour. It is despair that causes the radical opening of the self. Only in this way can new things flourish. “The spikes of pigment turn into arms, eyes, hands…”, says Castiella. “And it’s weird, of course. But everything new is weird.” We sense the breaking out of those who have overcome the thing that was holding them back. It is an incubation space. A gallery of existential vaults which acts like a greenhouse. In the Neoplatonic tradition, the human imagination is a channel through which matter expresses itself. It is the first emanation from God; “his limbs”, through which Beauty is manifested. Beauty here is understood as raw material of soul. The painter says that he wants to see these entities outside of his work. He wants to see them, open the curtains, take off the lids, because something has knocked on his door and he wants to see what it is. The artist’s contemplation of the material and the material’s contemplation of the artist here give rise to a process that is reminiscent of both alchemy and science fiction. Through the randomness of the horizontal component and the intentionality of the vertical, the painter traces the history of painting, analysing and cataloguing species like a biologist. Jose’s Waiting for the end to come is not static. Neither are his paintings allegories. Here we find living images, and the conviction that certain entities can be evoked through symbols. 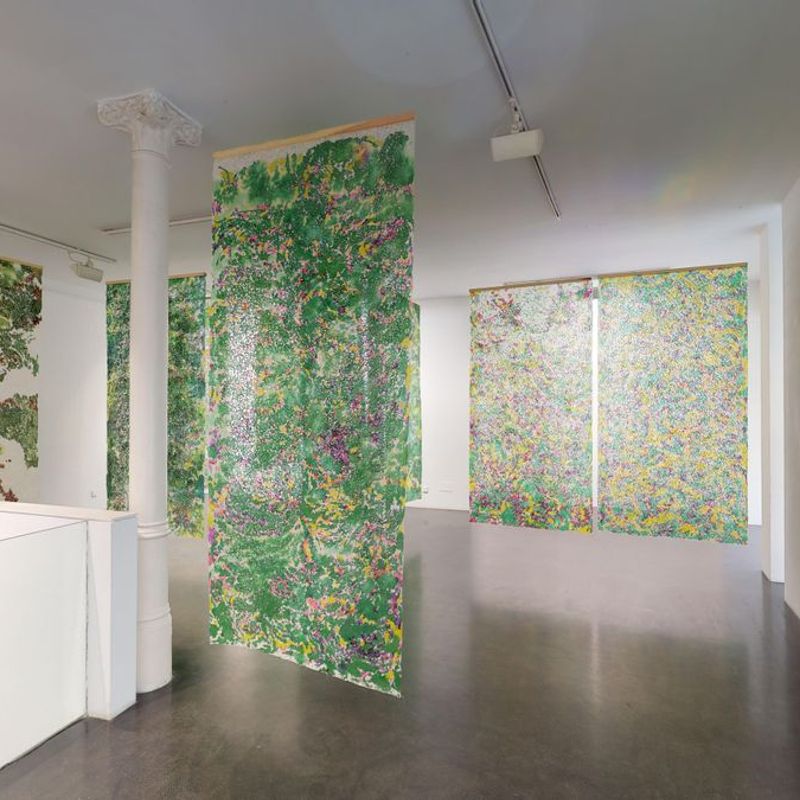 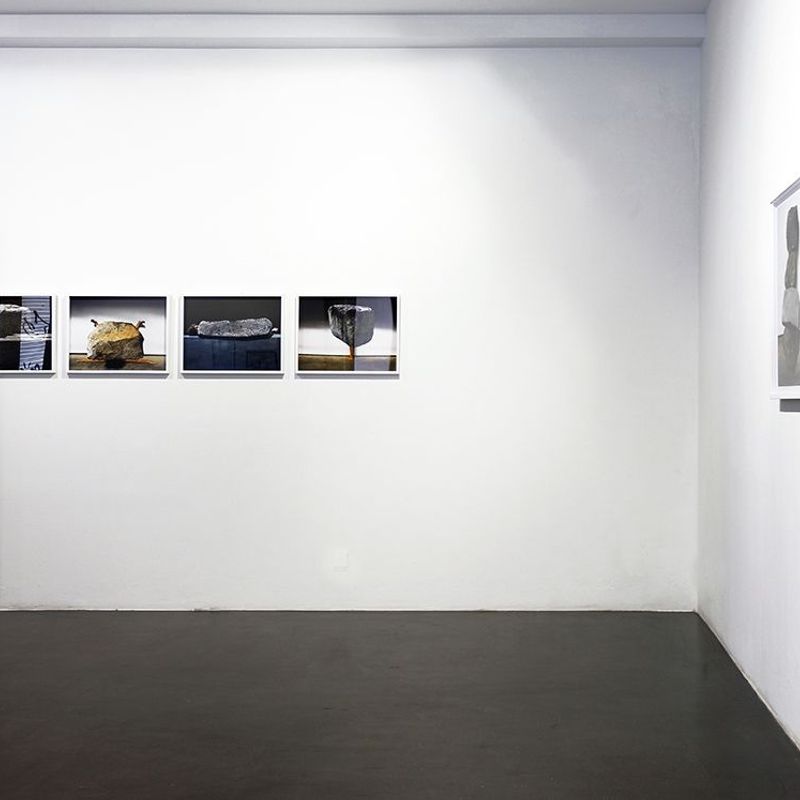 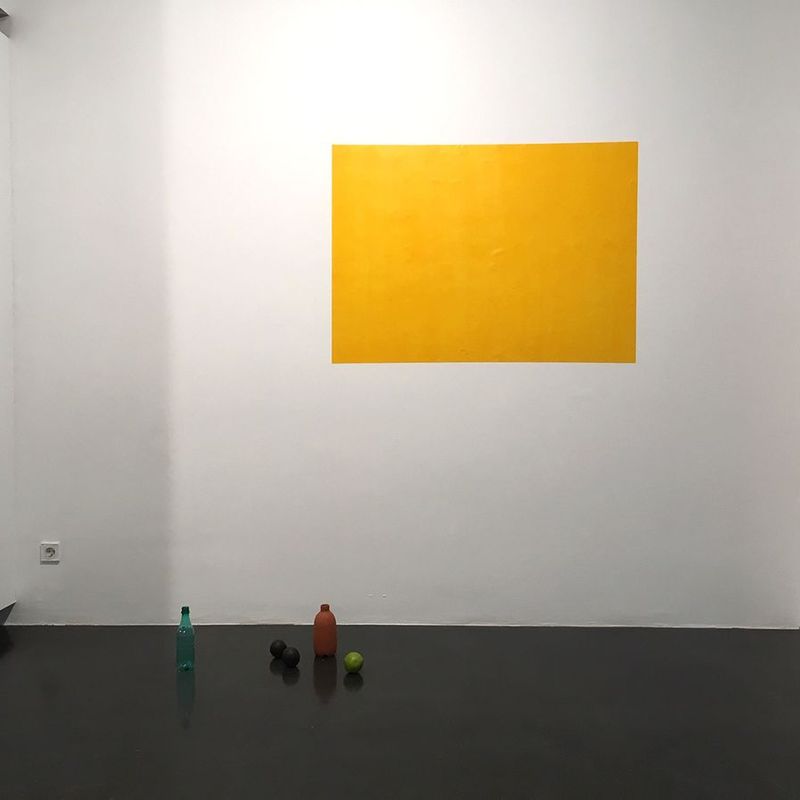 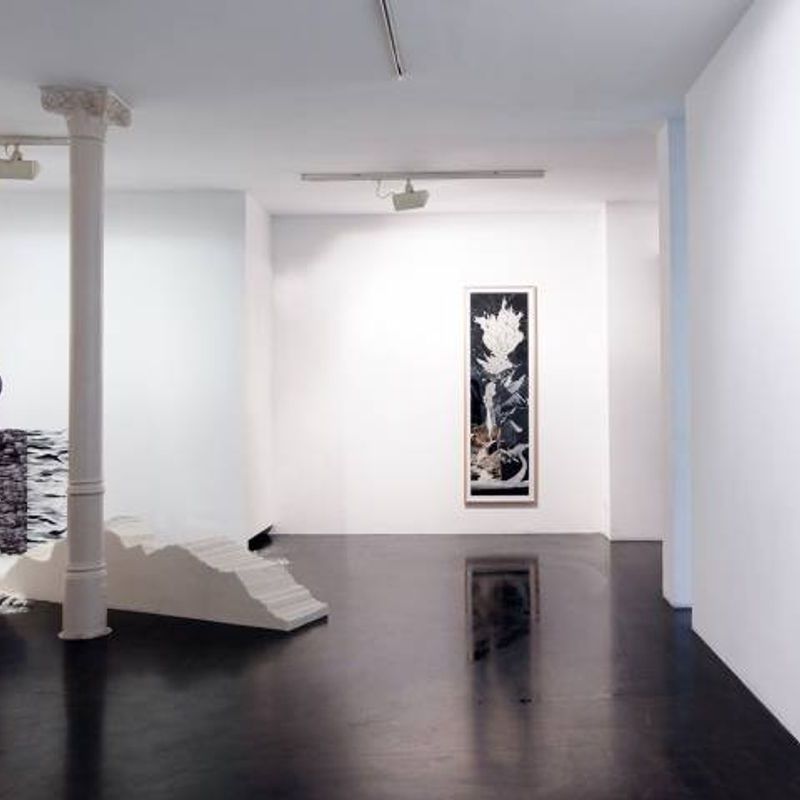 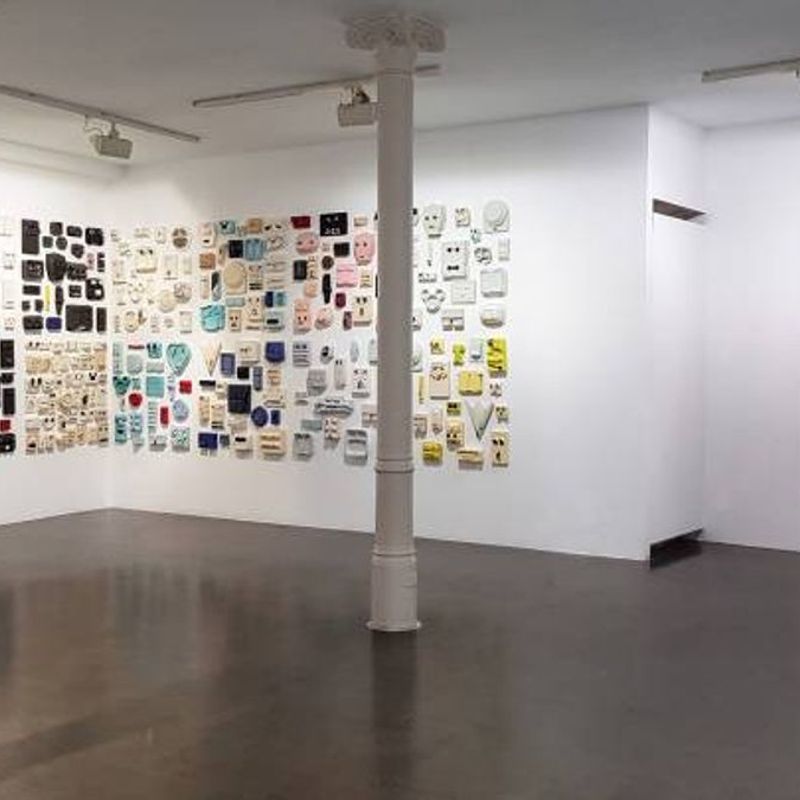 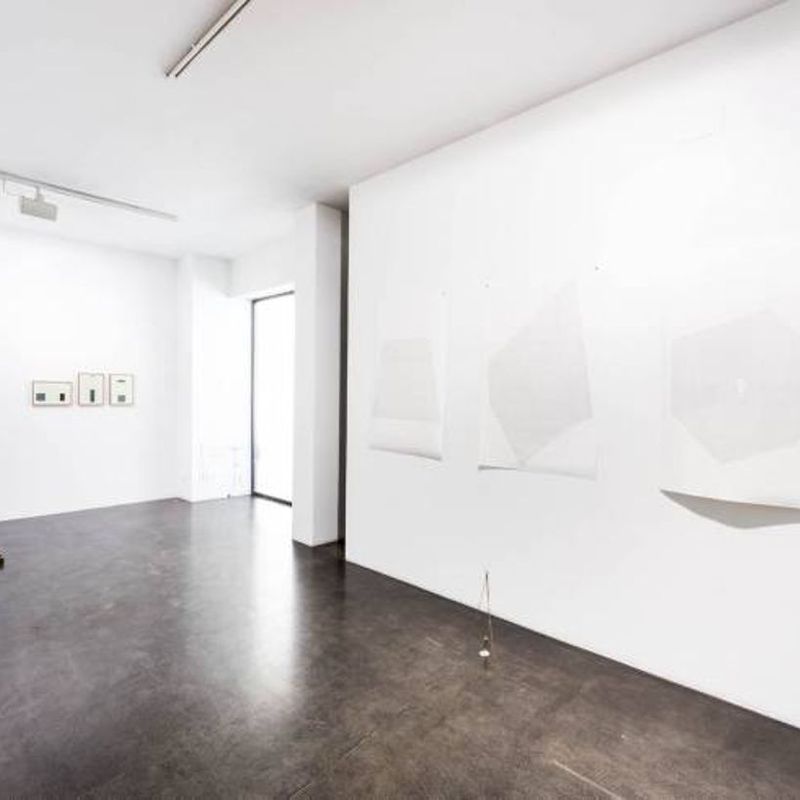