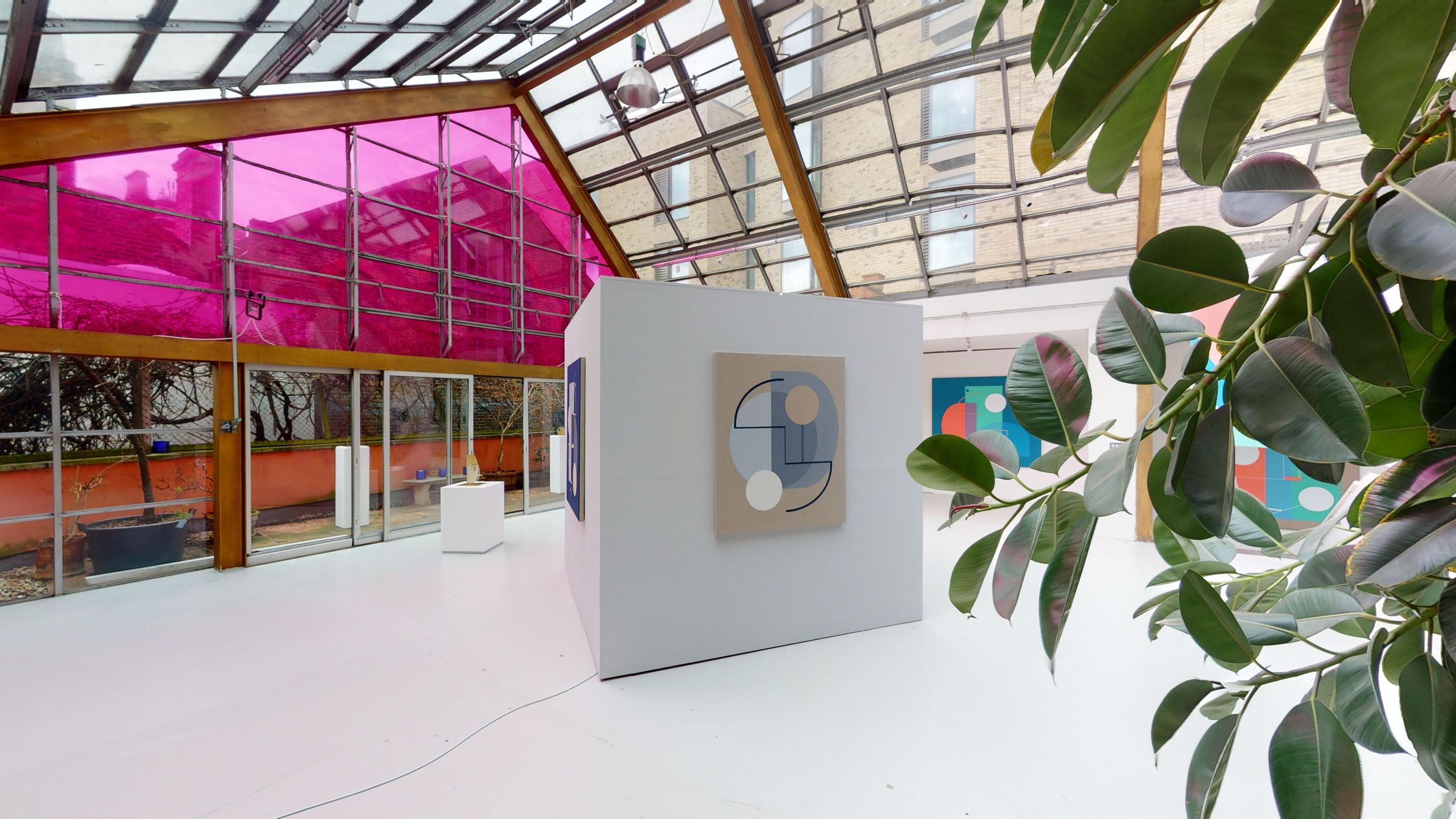 A boy smoking a cigarette. A man playing with forest monkeys. Men and women barefoot and partially clothed walking and freely dancing along dirt paths and through crowded markets.

These are some of the sights experienced by Charlie Chaplin and his brother Sydney upon arriving in Bali in 1932. These rare moments of natural life were documented in black-and-white film by Chaplin and recall "the golden age" in Balinese history before its Westernisation and fondly remembered by Sinta Tantra's family.

Pink vinyl on an industrial window casts a bright glow inviting the viewer towards the original film footage by Chaplin documenting his anthropological studies of pre-modern Balinese and Javanese life. In this world, Tantra presents new paintings, sound, textiles made in collaboration with local artisans, a site-specific mural on the staircase and new sculptures in the garden terrace.

A few years after his trip to Indonesia, Chaplin created his iconic film, "Modern Times" (1936), which uses the allegory of "The Tramp" as a parable on the modernisation and urbanisation of society. Set in the Great Depression, Chaplin's character begins his work at a factory and struggles to find a sense of belonging while encountering the novelty of modern living; a machine created to expedite our consumption (only to falter) and his body famously diving headfirst into its great cogs. Suffering a nervous breakdown, The Tramp goes to prison and finds a moment of solace, a sudden birdcall, his true freedom; only to be released into the modern world again.

With the support of his love, The Gamin, performed by Paulette Goddard, he finds work in a series of places: another factory, a department store, as a waiter and performer at a vaudeville. He wants to settle down, find a home, and live the ‘American dream’, but the constraints of modern society always work against him and these desires. As The Tramp and The Gamin walk off into the hills, on the run from the police, there is an endearing sense of hope that they could still find "paradise".

Initially, "Modern Times" provided a foundation to reflect on Tantra's work and her ongoing interests in modernity to shape a globalised identity, drawing from her roots in Bali, her early years and education in London, where she continues to live and work, and her travels from Italy to Pakistan. Throughout her journey as an artist, her style has adapted 'modernity' as a trope and allegory through her kaleidoscopic vision of colour, light, and form. Masses of monochrome colour become flattened and compressed into sheets or fields, marked by something mechanical and detached with the illusion of being machine-made. References to Art Deco, Bauhaus, Constructivism, and Minimalism create a visual language that interjects these genres with bursts of colour, tropical motifs, and unusual shapes and patterns - in a sense, claiming ownership of a Modernism which is distinctly her own and transcends geopolitical boundaries.

The joy of Tantra's work is in her deft ability to transform space through her refined and playful use of colour and dynamic abstract-geometric designs. From her earliest projects in the mid-2000s, Tantra has been interested in the role her work has in the public realm, showing her art internationally on bridges, buildings, playgrounds, and other structures which are regularly used and have a social function. These places and sites are then filtered through the prism of modernist thinkers and artists such as Buckminster Fuller, Alexander Calder and Sol LeWitt, figures linked by their shared interest in the world, connectivity, and utopian aspirations for the future. Her public art practice continuously informs new drawings, paintings, prints, and sculptures, like blueprints for a building.

Within the gallery at Kristin Hjellegjerde, Tantra has tapped into its previous histories as an industrial factory, an artist studio, a mid-century modernist home, to create a site-specific installation. The installation is paradoxically pre-modern and postmodern, suggestive of a tropical jungle and civilisation before Westernisation and uninhabited by humanity. In her words:

"I wanted to cut through the vast architectural volume of the space and somehow inject the spirit of escapism or stepping into another world - part nostalgic, part historical, real and imagined. "

This is particularly brought out by the modernist staircase at the centre of the gallery, which Tantra finds reminiscent of the Penguin Pool at London Zoo, designed by Berthold Lubetkin in 1934, as well as the Isokon Flats in Hampstead, North London, designed by Wells Coates between 1929 and 1932 and opened in 1934. The Isokon Flats were inhabited and visited by world-class artists, architects, writers, and theorists including Walter Gropius, Marcel Breuer, Laslo Moholy-Nagy, Naum Gabo, Piet Mondrian, Henry Moore, Barbara Hepworth, and Ben Nicholson. The building fell into disuse in the 1970s and 1990s until being rescued and refurbished as a gallery and flats in 2003. In this way, the staircase becomes a symbol for the hopes and dreams of modernity while pointing to its inadequacies as a realistic form of living.

We are seemingly frozen and locked in this moment of time, Sinta Tantra's vision of paradise. Occasionally, we might hear a piercing birdsong, awakening our inner selves and, perhaps, our true calling into the wild and the vast unknown. 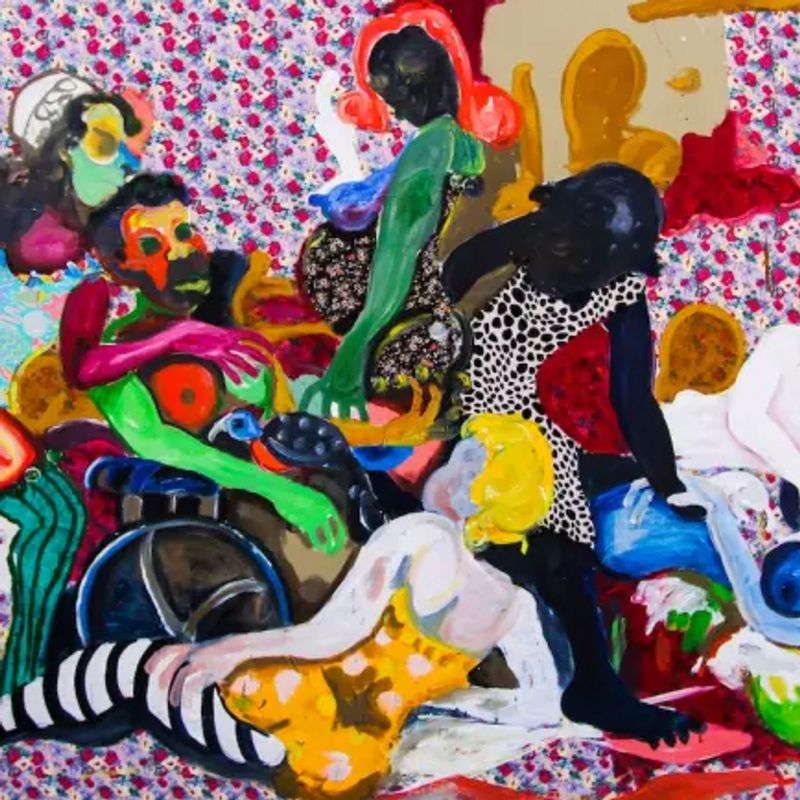 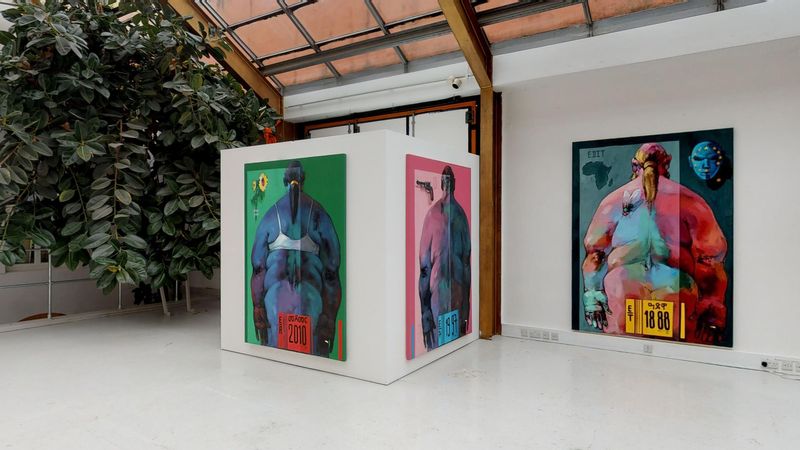 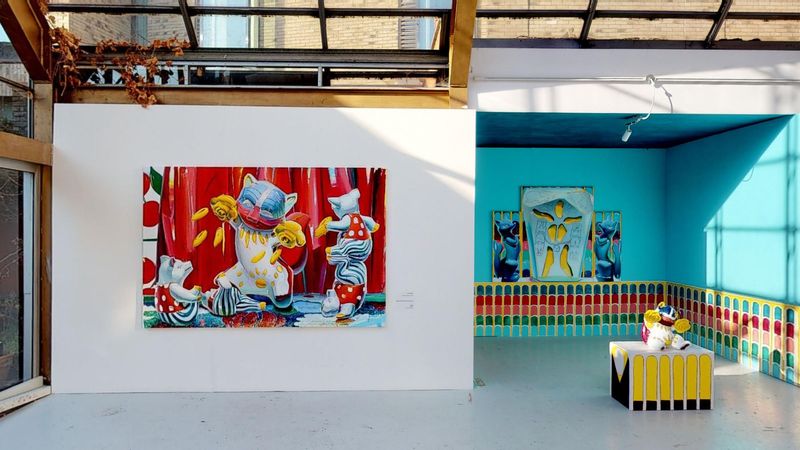 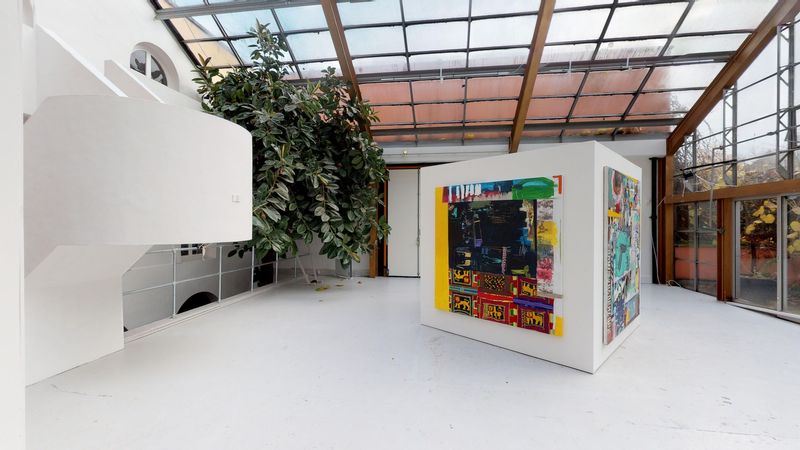 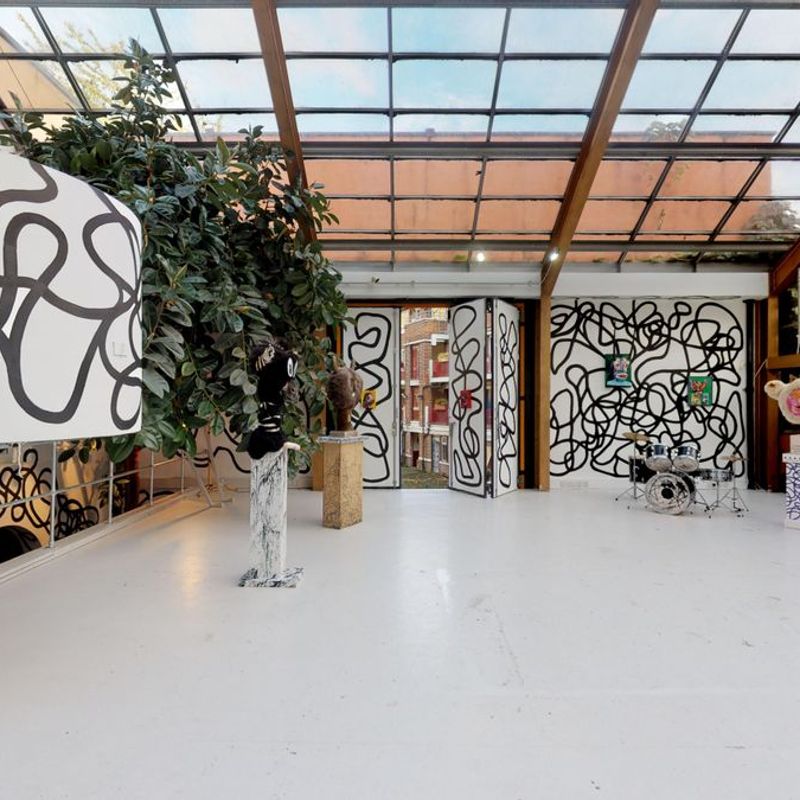 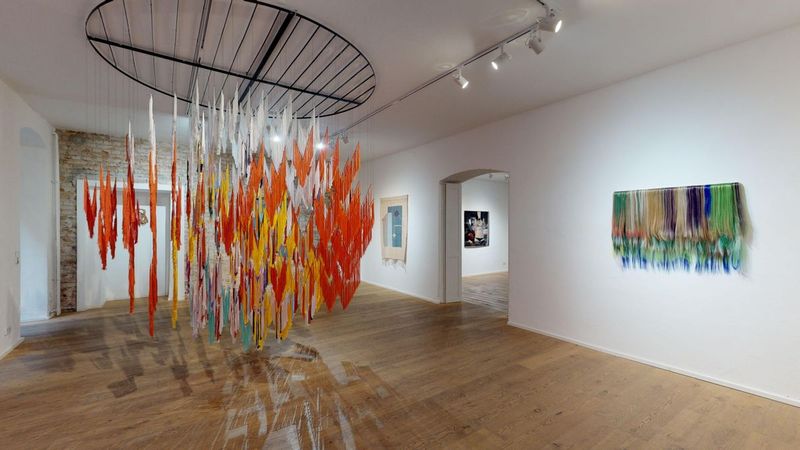 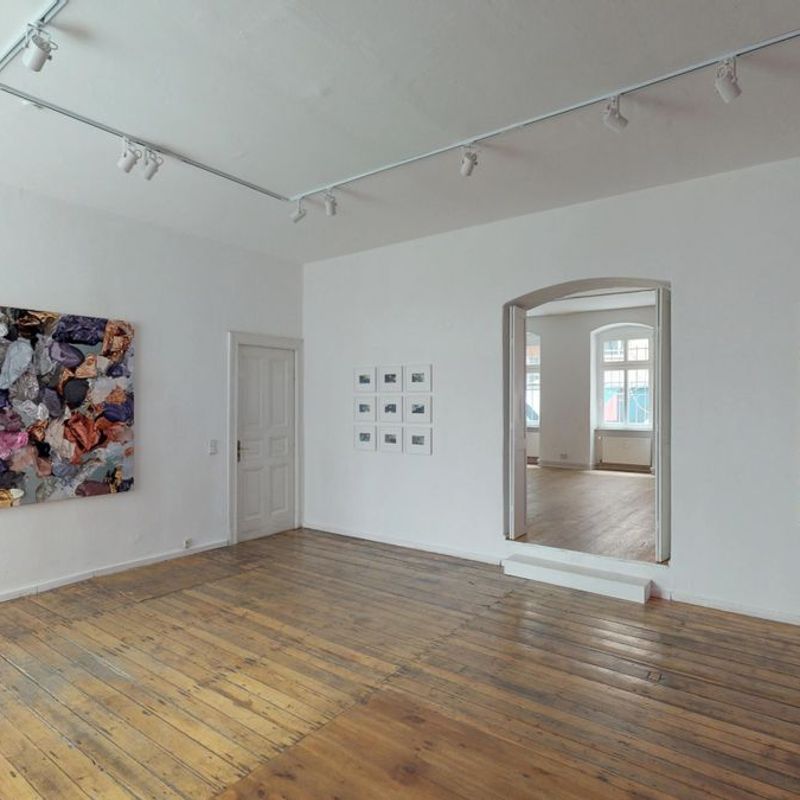 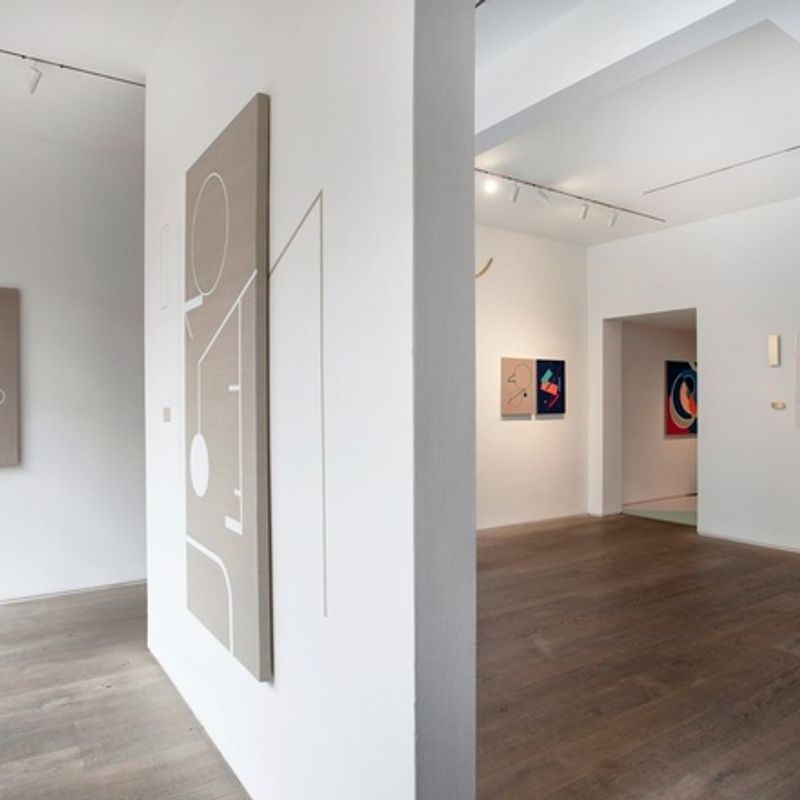